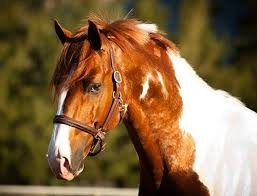 Umenno possesses a good trainable temperament, powerful flamboyant movement, a beautifully marked chestnut and white robe, and a pedigree of legendary ancestry with 50% thoroughbred.
Bred with athleticism in mind Umenno is an expressive powerful mover with off the floor paces and has demonstrated good jumping ability in the showjumping arena.
Umenno was also shown in hand throughout the UK, standing Open Non Native National Champion and young stock reserve.
He has stood Champion at many National county shows including, the Scottish Chaps National, the Highland Show, Fife Show, and Great Yorkshire along with other wins in Sport Horse classes.
As a four year old he jumped double clears in British Novice. Discovery and Newcomers. He qualified for the Royal Show potential showjumper, the Royal International Horse Show BSPA Ridden finals, Burghley young event horse, Arena UK 4 year old SJ championship, and the Scottish Sports Horse 4 year old showjumping sport horse series along with numerous overall Championships in ridden sport horse classes often standing vainquer to older competitors. Winner of the five year classes at Bicton and the six year old class in St Legier Switzerland with additional placings at RII with Rudi Wallerbosch.
Umenno has consistently sired SSH, BEF & KWPN Premium, Champion and Prize winning foals. A number of his daughters have gained Ster status for both quality of movement and jumping. His oldest progeny are now under saddle competing in the disciplines of dressage, show jumping and eventing and are also fairing well in ridden showing classes.
His eldest daughter Aquenna out of our foundation dam Quinine (Quater x Galant) is already a JC Pony after just 12 months in competition. Others include Bequinna full sister to Aquenna, Pascalette and Biornno (Aram x Oklund) showjumping with success in France and Switzerland.

Another well known Umenno son, Buenno, is a licenced stallion currently standing stud in Europe.
Wellington
His sire (now deceased) belonged to the famous VDL Stud in Holland. Not only was Wellington a successful show jumper, but he was also an achieved dressage stallion. He has sired many ‘ster’ and ‘keur’ mares and many approved stallion sons including Farrington, Glennridge and Emillion of World Cup success. His offspring are of International show jumping standard include Jerome, VDL Jupiter and What a Game. Proving himself to be a versatile sire, Wellington also sired many successful dressage horses including Ceylon and Bolvorms to name but a few.
Nimmerdor
Umenno’s grandsire, the legendary Nimmerdor, was named KWPN Stallion of the Century. Son of the ‘preferent’ stallion Farn, the ‘preferant’ Nimmerdor was the most famous of all the old-fashioned Holstein’s offspring. Nimmerdor has had a tremendous, far-reaching influence upon the world of equestrian breeding and has sired over 50 Approved sons as well as a multitude of international show jumpers and exceptional brood mares.
Samber

Evelien was a daughter of the world famous Approved coloured stallion Samber; another truly versatile stallion and, to date, the most famous of all coloured sires.
Samber achieved ZZ level in Show jumping and Grand Prix level in dressage. He has also proven himself a remarkable sire producing versatile offspring succeeding in all Olympic disciplines

Pericles
1962 TB -Pericles was an English bred Thoroughbred.
He stood at stud in the Netherlands from 1976 until his death in 1987. He was one of very few Thoroughbreds like Lucky Boy to achieve Preferent status. Pericles did some racing and competed in Open Jumpers later in his career.
His offspring made excellent sport horses and proved themselves in the breeding shed as well.
Pericles was best known as being a dressage sire. He is also the maternal grandsire of the legendary stallion Ulft.
Craftsman was a very successful thoroughbred stallion by Trocadero who is by Drum beat