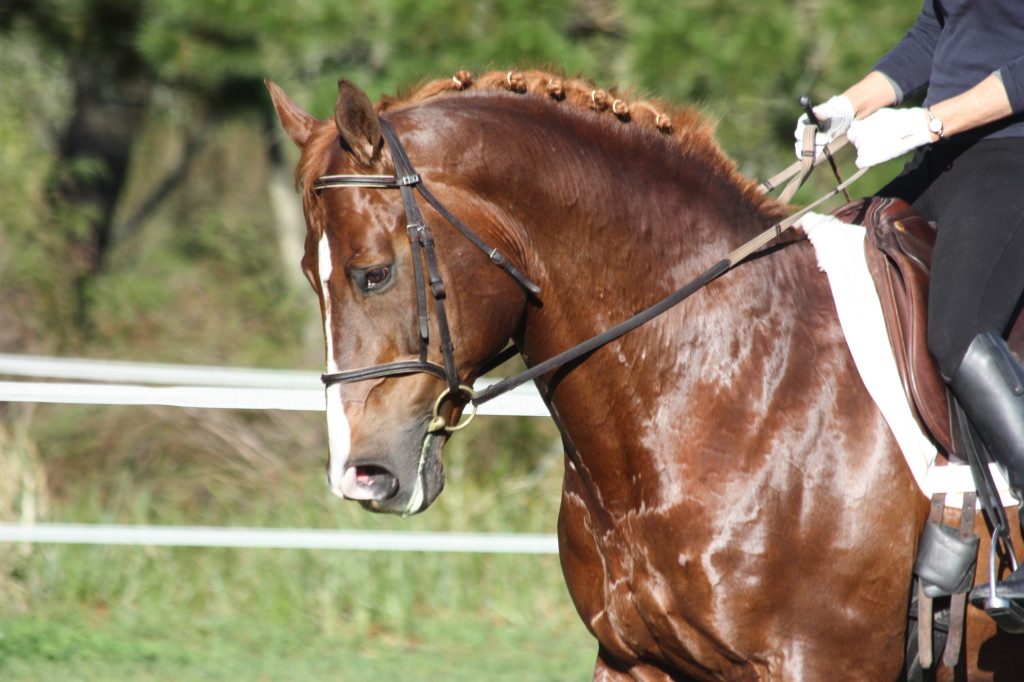 Bonheur’s pedigree is 5/8 Selle Francais, in keeping with dressage trends which have integrated this breed with classical dressage bloodlines in the last generation.
More specifically the Selle Francais was used by numerous European Studs Books as a breed lightening alternative to Thoroughbreds and Trakehner for Dressage horses – due to the fizzy temperament which the latter tended to produce particularly in the first two generations.

The success of this trend was confirmed by the individual Dressage results in Sydney Olympics in 2000 which saw 5 out of the 8 horses showing between 12.5% and 25% Selle Francais pedigrees.

More specifically, Bonheur’s sire line is world renowned. He is by the imported Selle Francais Stallion, Beau Venuer who in turn was by the world ranked sire of Showjumpers for his generation, Grand Veneur.
Grand Veneur was one of the highest BLUP rated horses ever in France and his progeny are formally recognized for their wonderful temperaments and easy workability. This sire line has continued to be represented in world showjumping sire ratings through each generation.

Bonheur’s sire Beau Veneur is no exception, being the 4th out of 180 competitors at his licencing in Fontainebleu, as well as as well as an international A grade showjumper and Medium Dressage horse himself. In addition he was awarded the prestigious “Plus De Dressage” title by the FEI Dressage Committee which was appointed to select Selle Francais stallions which showed a particular propensity for dressage as well as the ability to impart these qualities to their progeny. Beau Veneur was one of only 200 stallions to be given this award, which formed part of an initiative to motivate France’s Dressage breeding programme to the same level of International recognition as the Selle Francais has achieved in Showjumping through the past decades.

That this initiative has worked, is confirmed by 2005/2006 world dressage rankings which sees at least 5 Selle Francais Stud Book Horses listed in the top 200 rankings.

Bonheur’s damline is no less impressive, his mother being the German Imported mare, Weissgold, who in turn is by the legendary Champion Hanoverian Stallion Weltmeyer.
Weltmeyer is considered by some to be THE dressage stallion of the century, and aside from being a champion sire and Grand prix competitor himself, has sored multiple Grand Prix competitors, beena World ranked Dressage Sire on numerous occations, and gone on to extend his breeding fame as a damsire of Grand prix achievers and licencing chamions.
The 2004 Hannoverian Licencing is a case in point which saw Weltmeyer as the damsire of 3 of the top 8 young stallion candidates in a field of 80 competitors.
Weltmeyer has, in addition, also produced multiple licenced sons and State Premium Daughters.
Bonheur’s damline, also contains internationally proven Selle Francais bloodlines including the Premium Stallion and Olympic Competitor Quo Vadis
Bonheur stamps his progeny with a rich chestnut, (often deep liver) colour, white points and frequently a flaxen mane and tail. He imparts good bone, an excellent temperament and the excellent paces characteristic of the Weltmeyer bloodline.
His foals have been placed 1st and 2nd by an international judge (Warmblood Show 2004) and the highest achieved progeny averages (75%) on evaluation of International inspectorate.
His son, Bien Venu also achieved the highest national Prospective Stallion grading of 80% with excellent marks for paces (8; 8.5 and 8.5)
A Bonheur daughter Bonne Amie was also awarded Champion of the General Breed division for her age.